Ewen Clark owner/captain at Sea Run Tuna Charters would like to invite you for a thrill of a lifetime, Giant Bluefin Tuna fishing adventure aboard Pura Vida. We have hosted world class gamefish enthusiasts and also many looking for their first Giant Bluefin experience.

Giant Tuna Fishing cannot get any better than you will witness on MacLeods Ledge. The Ledge is a reef that runs off the northwestern tip of PEI. It is here where huge schools of herring start to show up in August to spawn and the Giants gather to feed on them for several weeks every year.

You will never have to put a hook in the water to be blown away by the marine life that congregates on the Ledge.... Giant Bluefin Tuna, Whales, Seals, Sharks and Mackerel Gannets all here to feed for weeks before their annual migrations.

At Sea Run Tuna Charters, we never tire of seeing the thrill of a new guest catching a true Giant Bluefin Tuna or re-hosting Friends who can never get enough of the MacLeods Ledge Bluefin Fishery. 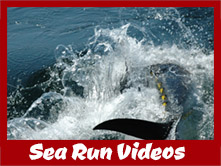